I’m very lucky to be in the position where I get the opportunity to talk to some of the horsey world’s premier riders, coaches and judges. When I catch up with dressage star Abi Lyle during a tea break at her demo evening, it feels like chatting with an old friend – even though I have never met her before. She has a warmth and a charisma that immediately puts people at ease, a genuine openness underpinned by plenty of that incomparable Irish charm!

This is the first demo evening she has done on her own and I am surprised when she tells me she was nervous, because you would never have known.

She expertly works each fantastic partnership (Julie Robertson, Julie Wattie, Sam Turpitt and Fenella Quinn) through a diverse range of exercises concurrent with the level which they are working at, making a noticeable difference to both horse and rider. But just as importantly, she quickly builds a rapport with the audience based on a great sense of humour, self-depreciation and candidness. But if you follow her on Instagram (and if you don’t, you should!), none of this will surprise you!

Undoubtedly she is driven, talented and incredibly hard working, but she also doesn’t ever take herself too seriously, frequently filming herself on horseback musing about everything from the motivational value of a Britney Spears playlist, to the burger she ate the night before and why her jodhpurs now feel too tight (something we can all relate to!) And therein lies the key to her popularity. She’s so relatable. She wears sparkly bling trainers to the demo, a nod to being at once comfortable in your own skin, while also celebrating your own individuality, and gives honest and down to earth advice throughout. One of my favourites being ‘ride with a big belly and a double chin’It makes the audience giggle, but that’s such a big part of what she wants to achieve. Yes to make us better riders, because the advice is tantamount to sit up, tuck your tailbone under and keep your head and eyes up, but crucially, to make us enjoy ourselves too! Because when we are having fun, we are less likely to feel pressure. And when we feel pressure, we start to feel nervous, and it’s this stress that builds an environment for negativity and unkindness. 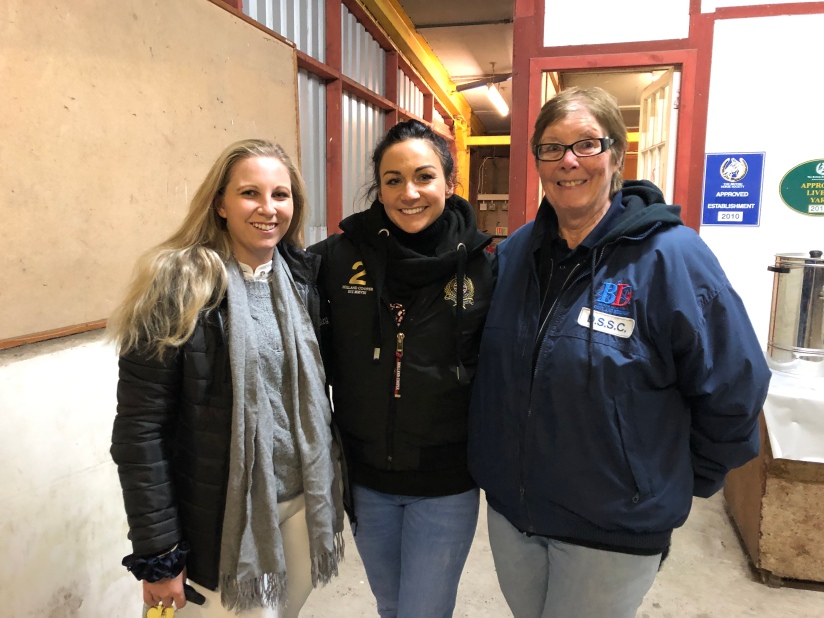 Indeed during the demo she talks openly about her personal battles with nerves and the work she has done with a sports psychologist to try and manage them, about the importance of keeping things in perspective and of being kind, both to yourself and others. Perhaps not surprising coming from a rider who’s Instagram profile reads ‘trying to make the horsey world a kinder place’. An admirable sentiment, though not always an easy one to achieve in the sometimes not-so-kind world of horses. Abi has been vocal in speaking out against bullying in the sport and I am keen to talk to her about (amongst other things), how she traverses life through the social media lens and how she deals with negativity and the all too often intimidating world of dressage.

‘How have you found your first solo demo tonight?’

‘I was really nervous actually’.

‘That didn’t come across at all!’

‘Everyone is really responsive, so that actually really helps. It’s hard though when you plan what you want to do, because with horses it can be really hard to stick to because you get different problems than you think you are going to get. But I’m enjoying it!’

‘What do you enjoy most about giving these demo evenings?’

‘Do you know what though, it’s the same thing as teaching, because even though you might see a horse and rider you have never seen before, to make a wee improvement is always really, really nice to see. It’s just nice to see people coming out and taking an interest and wanting to know a wee bit more. And also I do try to make it not too serious and I like it if people are sharing in that sentiment because I think dressage is often too serious. If people are enjoying it then I will be really happy’.

‘What’s the best piece of advice you would give aspiring dressage riders?’

‘We live in a social media world now where our every move is scrutinised. It must be very difficult to have the spotlight on you, especially because the horsey world isn’t always very kind. How do you deal with negativity?’

‘In all honesty, I’m kind of at a point where sometimes you see top riders and you look at what they have to put up with and what people say about them, and actually it does put me off. But I just try to think that’s why I kind of want to be more vocal about being nice to each other because I think you can only drive it out with kindness. Because the thing is, horses humble us enough as it is. We don’t need to do it to each other. I don’t actually have Facebook on my phone. I don’t scroll Facebook for that reason. Because I just don’t want to see any of that kind of stuff. I think there should be 10 lovely comments for any negative one comment’.

‘Do you enjoy being a role model? Or do you feel pressure?’

‘I didn’t ever think I was one. I haven’t really thought about it. I literally just try to be nice and to make my horses go as well as I can. Because I’m not anywhere near the rider I want to be (at this point I interject and say there’s no hope for the rest of us then! , to which Abi points out that it’s the old adage of the more you know, the more you realise you don’t!)

But I think, good if I am though, because I think I have good intentions. I just want people to be nice to each other and to enjoy their horses’.

‘What would you say is the highlight of your career so far?’

‘It’s happening on Thursday! I’ve been invited to HOYS for the Dressage Future Elite Championships. That will be it. I’ve never ridden in a stadium before. I’m looking on the Instagram and seeing the arena and I’m like (she makes a throwing up noise!) But I’ve actually had the most amazing season with this horse (Farrell, owned by Fenella Quinn), so that will be the highlight. I think there’s 10 horses, they are all to be aged 8 or 9, so we’re all green and we get to go in, and I’m just going to ride it like I stole it’.

So there you go. Ride it like you stole it. If that isn’t great advice, then I don’t know what is.

(N.B. Since chatting with Abi, HOYS has taken place where she and Farrell bossed their stadium debut with a fantastic score of 72.16% for fourth place )