It’s safe to say that the Chris Bartle demo took place on a night of some of the wildest winter weather in a long time! A howling gale and torrential rain didn’t stop the equestrians of Aberdeenshire turning up – though to a chorus of “we must be mad” echoing through the gathering crowd (we are horsey folk, it’s a prerequisite that we are a bit mad). But gather they did, a sea of blankets and bobble hats, because despite the horrendous weather conditions, it’s not every day that you get the opportunity to watch and learn from one of the world’s best eventing coaches, the man credited with the phenomenal rise and dominance of the German team, and more recently, the resurgence of British success –  eventing super coach, Chris Bartle.

(Eilidh MacAulay flying over the oxer!)

Chris’s list of accomplishments are too numerous to list here. But highlights include a sixth place in individual dressage at the 1984 Los Angeles Olympics, eventing team gold at the European Championships at Burghley in 1997 and winning Badminton a year later in 1998. During his tenure as German national coach from 2001 to 2016, the team won gold at the 2008 and 2012 Olympics, World Team Gold in 2014 and European Team Gold in 2011, 2013 and 2015. In 2017, Chris joined the British team as Eventing Performance Coach. Later that same year, Britain won team gold at the European Eventing Championships, their first since 2009 (incidentally beating Germany to do so). And earlier this year, they won both team and individual gold at the World Equestrian Games. With such a distinguished record behind him, the moniker of ‘super coach’ is both a well earned, and well deserved one.

From the outset the key theme of the demo was communication, perhaps not surprising when one considers what it takes to not only motivate and inspire individuals, but to mould their different styles, attitudes and experience into a successful team. It’s a theme that underpinned his approach to each of the riders, (Rosanagh Davison, Sophie Bultitude, Pollyanna Smith, Eilidh MacAulay, Millie Lawson, Jodie Neill, Shaun Murray and our very own Country Ways sponsored rider Eilidh Costelloe), all of whom did an incredible job given the severe weather conditions. His philosophy was clear; whatever level you may be at, communication with your horse via your body language is key. The performance of the horse can only ever be as good as that of the rider, thus every training session starts with assessing the riders ‘position statement’. What are they telling their horse with their legs, seat and upper body? And what should they not be telling it with their hands!

Throughout the demo Chris stressed that the hands are there to guide, not pull, and that they are never to be used as a primary aid. The body is the most important influence over the horses way of going and Chris demonstrated this in a tangible way by coaching the riders through various types of seat; light, contact, racing, preparation and landing. Each seat has a different effect, but the principle is the same, that the horse should respond to the riders body, not hands. This is further demonstrated by his insistence that the riders lengthen their reins and let their horses necks out. By letting them poke their nose slightly, the distance between the nose and point of shoulder is more, which stops them getting too close to the fence. Shorten the neck too much and you close the gap and increase the risk of hitting the fence. While it also seems counterintuitive to lengthen your reins on a strong horse, this is exactly what you should do, rather than shorten them, which will only make the horse stronger. One audience member asks why this is the case, when she is told by her own trainer to shorten her reins when she is jumping her strong horse? Chris used the excellent analogy of a tug of war, in that you wouldn’t lean forward and shorten the rope to win, you would let some length out, lean back and let your back do the pulling, not your arms. Again it is the body position that influences the horse. 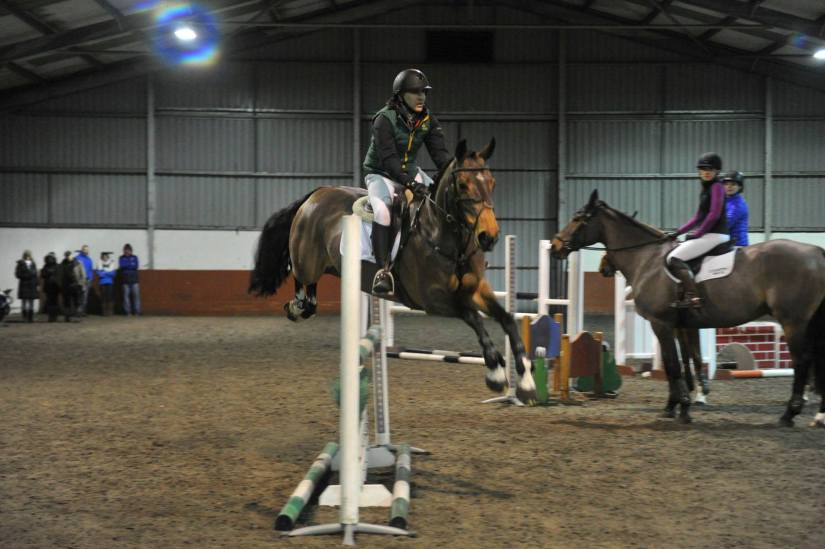 (Check that angle! Shaun Murray showing us how it’s done!)

Chris also stressed the significance of our eyes – where we look has a crucial influence over our position (and it shouldn’t be down!) He demonstrated his point by instructing the riders to imagine the fence they are jumping is much higher, to place their gaze as if it was 1.60 instead.  He explained this is the same advice he gives to the likes of Ros Canter when warming up for championships. His reasoning is that it immediately lifts the riders eye line and encourages them to stay up in the body. The effect is clear as the riders became more open in their shoulders on approach to the fences. Chris explained that the riders job is always to look for the next fence, the horse can sort its own stride out if we don’t interfere. This also encourages an upright position in landing, as well as take off, ensuring that the rider doesn’t end up in front of the point of balance. He asked some of the riders to read out the phone number of one of the banners in their eye line as they jump the fence to demonstrate his point.

Perhaps not surprising given Chris’s dressage background, he also emphasised the importance of flatwork training to the jumping phase. The horse first and foremost should be relaxed and accepting of the contact and a showjumping course should be akin to a dressage test, only with jumps in the way. He instructed the riders to bend their horses to the outside, then to the inside and forward in a light seat. All the time encouraging relaxation and connection, whilst also working on rhythm, straightness and balance. This is the way in which you give the horse options, and it’s amazing what they can do when they have them.

I am lucky enough as a staff member of Country Ways, one of the sponsors of the event, to have a quick chat with Chris during the break. I’ll admit I was pretty nervous at the thought (although a glass of prosecco did help!), but I needn’t have worried. Chris is incredibly approachable, friendly, and relaxed – a thoroughly nice guy (no coincidence that he is able to get such a great tune out of riders and their horses I think)…

Q: “Does your philosophy change coaching a team as opposed to an individual?”

Q: “What is the best piece of advice you have ever been given?”

A: “Never give up. Keep remounting!”

Q: “What is the proudest moment of your career so far?”

A: “I am very proud of my first Olympics in LA. Winning Badminton as well. London 2012 was a huge thrill for me as a Brit too”.

Q: “Do you have a favourite horse you’ve ever ridden?”

A: “It’s hard to compare them because they belong to different eras and are all so different in their own way. Wiley Trout I have a sentimental attachment to because he took me so far. Word Perfect was tricky but I had the hugest respect for him”.

Q: “What combination are you most excited for in the future?”

A: “I love the buzz of working with them all. They all have the potential to win an Olympic medal”.

Q: “How have you found the day’s coaching today?”

A: “I’ve been so impressed with all the enthusiasm of the riders and their willingness to tackle anything”.

One of the audience members asks Chris what his highlight of being a coach is? He replies that it’s difficult to say because he is always looking forward for the next one. That means to the Europeans in 2019 and to Tokyo in 2020.

And with Chris at the helm, both are an exciting prospect for team GB… 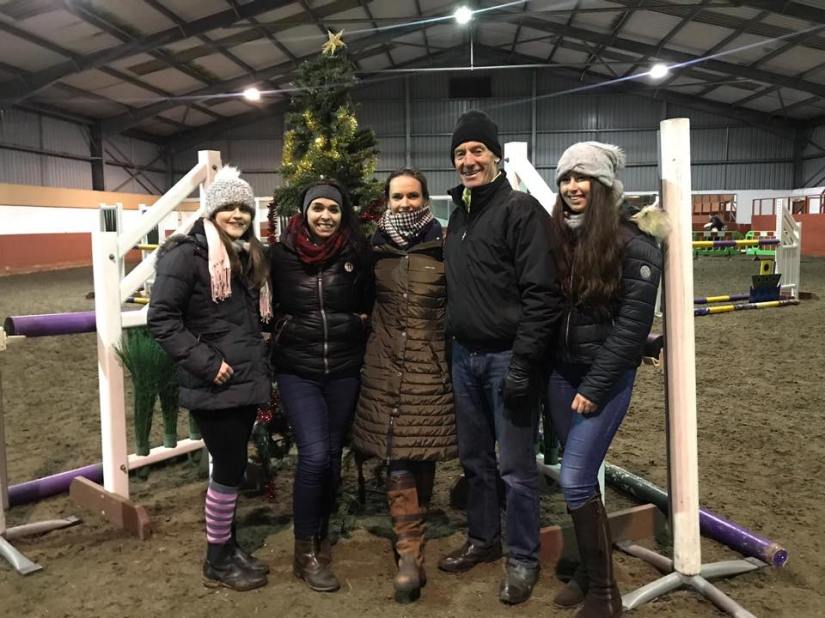 This event was organised by David Lawson Equestrian Events and we are delighted to say that the raffle in aid of Parkinsons UK also raised £2,325. Sponsored by Patterson Equestrian Arenas and Country Ways.